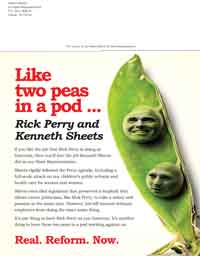 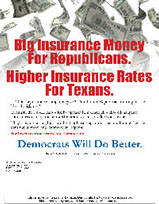 Tort reformers – masquerading as education reformers – dumped $150,000 on Chente Quintanilla’s comeback against State Representative Mary González. Though vastly outspent, she kicked their butts anyway. We created a message that contrasted Mary’s energy and effectiveness with her do-nothing, has-been opponent. This mailer set the stage for the rest of the campaign. We also made sure pieces were seamlessly bi-lingual in a district where Spanish is the first language for a majority of the voters.

In the Democratic Primary for County Judge, Sarah Eckhardt had the message, while Andy Brown had the money. This time, the message won. I helped develop a populist message for her, which, to be truthful, wasn’t rocket surgery. That’s who Sarah is. With this introductory mailer, we seized the initiative and never let go.

Austin Community College desperately needed to pass $386 million in bonds for new facilities and upgrades to existing buildings. However, early polling found that voters were not eager to pass a tax increase and that no single message could bring them around. Plus, we were on the ballot with a light rail proposition that was ultimately defeated by a wide margin. We took the risk of delivering multiple messages for several diverse target groups, and it paid off.

In 2015, Travis County voters – concerned about affordability in Austin – narrowly rejected the construction of a new courthouse. In 2017, the county needed to pass bonds for new parks, roads and drainage, but voters were still concerned about affordability. We developed a mail plan that focused on the broad benefits while minimizing the financial impact. The three propositions passed with 70% of the vote.

Peas In A Pod

In this district, there was no better example of a money-hungry professional politician than Governor Rick Perry. To these voters, our schools are ineffective and health care is unaffordable because of professional politicians. Even better, Sheets had authored a bill to end state employee double dipping – except he exempted politicians. And who was double-dipping at that time? Rick Perry. We pulled it all together in this third mailer for Miklos. Eventually, Miklos lost by a little over one point in a district that tilted heavily to the GOP.

Republican State Representative Dee Margo made the mistake of casting votes that harmed vulnerable seniors and women. The Joe Moody Campaign pounced on them, augmenting our central message about public education. Targeted to women and seniors, this piece provided more evidence that Margo wasn’t in touch with the needs of the average voter in his district.

Occasionally, candidates transcend partisan politics and win elections the numbers indicate they will lose. That was Craig Eiland in 2012. On paper, he was the most vulnerable Democratic incumbent State Representative. In reality, Craig had spearheaded a herculean effort to help Galveston recover from Hurricane Ike’s devastation. From the outset, we focused on his performance after Ike and steered clear of issues that would take the race into partisan waters. Eiland won with 56% while President Obama was getting only 40% of the vote.

Who I Walk With

Many armchair political geniuses will often say there’s no way a middle-aged Anglo male can win a 67% Latino district on the Border. Tell that to Tracy King. While ethnicity certainly matters, Tracy has consistently shown there is a special culture shared by Hispanics and Anglos living near the Rio Grande. King isn’t just bi-lingual; he’s bi-cultural. This opening mailer seamlessly weaves through cultural nuances to convey a larger, more important vision.

For years, Democratic candidates and the party itself often simply asked minority Democrats – particularly African-Americans and Latinos -- to merely go vote. Rarely did we tell them why they ought to vote. Frankly, it was insulting. That started to change in 2008, and this mailer was one of the first times that base Democrats received a full-throated message meant to energize and galvanize their support.